The Chatham-Kent Police Service responded to 126 calls for service in the last 24 hours. Three people were arrested. One on a outstanding warrant.

Last night at approximately 9:00 p.m. police responded to a disturbance in a parking lot on Canal Street West in Tilbury.

Through investigation, police learned one man had assaulted another.

The Chatham-Kent Police arrested a man for impaired driving.

At approximately 10:30 p.m. police responded to a driving complaint on Richmond Street in Chatham. The vehicle was located, and a roadside screening was utilized. The was arrested and transported to police headquarters for further breath tests.

Kevin HORAK, 30 years old,  of Raleigh Township has been charged with having a blood alcohol concentration exceeding the legal limit.  He has been released with conditions pending a future court date of March 30, 2022.

On March 12, 2022 a break and enter was reported at a storage facility on Queens Line in Raleigh Township. The following images were provided to police.

If you can identify the person in these images, please contact Constable Ken Muir at kenmu@chatham-kent.ca. Anonymous callers may call Crime Stoppers at 1-800-222-TIPS (8477) and may be eligible for a cash reward. 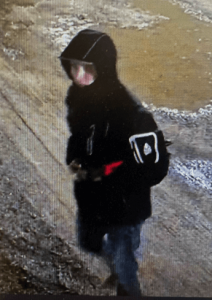 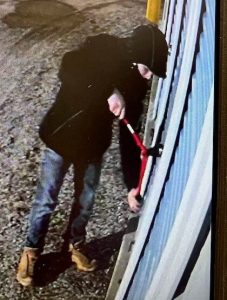 Letter to the Editor: Thank you to all Tilbury Educators!

January 24, 2022 Tilbury Times Comments Off on Letter to the Editor: Thank you to all Tilbury Educators!

“Here in Tilbury, we have some of the best schools in the area, in large part because of the outstanding educational staff! Today, on International […]

By Bird Bouchard, Local Journalism Initiative Ridgetown Independent News Those looking to access Municipal Service Centres in Tilbury, Ridgetown and Dresden are going to have to […]

Is your child starting kindergarten next year?

January 26, 2022 Tilbury Times Comments Off on Is your child starting kindergarten next year?

Is your child starting kindergarten next year? Registration is underway for the 2022/2023 school year. Please contact Tilbury Area Public School if you have any […]